Check out the surroundings, places you can visit and how to get here!
Generally

Our rooms are located in the village of Leptokarya, district of Pieria. Before us lies the Thermaikos Gulf, one aspect of the blue Aegean, while behind us stands the mythical Mount Olympus ...
It is 100 km from the city of Thessaloniki, and the nearest town is Katerini, at 30 km.
The Leptokarya is one of the most complete holiday locations. Combines quietness with bustle, vitality and serenity, the mountains and the sea, culture and entertainment. All this makes it suitable for any company or type of holiday you want to do ... More on Leptokarya here.

Platamon is a village of the municipality Olympus- Dion. Located in Pieria prefecture, at the southern end, at the bottom of Mount Olympus. At the top, where he is a natural stronghold of the sea, stands the castle.

The Olympus is the highest  mountain  of  Greece  known worldwide mainly for the mythological context, and on top of ( Mytikas -2917 m) lived  twelve "Olympians" Gods according to the religion of the ancient Greeks. It is also the second highest mountain in the  Balkans , but throughout the European region of the  Alps  to the Caucasus . The compact mountainous volume dominates impose limits  Macedonia and  Thessaly , with a number of high peaks Slots deep ravines, around which spans an area of outstanding biodiversity. To protect this unique heritage, declared early in 1938 as the first  National Park of Greece . Whatever one says about the Olympus is a bit ...

Perhaps the most famous of the dozens of streams of Olympus is that of Orlia.Stems from the tops of mountains and flows into the Thermaikos Gulf. Throughout the path of the mountain, surrounded by the lush greenery of Mount Olympus, and are impressive waterfalls and lakes, which you can visit.

The  Palaios Panteleimon  is a village in the prefecture of  Pieria . It is built at an altitude of 440 m on the eastern slopes of  Mount Olympus . It belongs to the former  municipality of East Olympus , which is an administrative unit of the municipality  Dion - Olympus , and the population according to the 2001 census is 34 residents.

The Palaios Panteleimon is featured  traditional settlement  as one of the finest examples of traditional architecture makedonitikis in northern Greece. The village has maintained its local color as it was almost deserted by the 1950s, when the residents of moves en masse to the largest village of  Neos Panteleimon . the 1980s however reversed the situation, when the settlement was restored and began the rapid tourist development. The traditional local color of the village and the small distance that separated him from the tourist resorts of Himachal Pradesh and the national road Athens - Thessaloniki  spewed tourist region. Today it attracts visitors and passers of southern Pieria.

At the foot of Mount Olympus and just 5 km from the beaches of Pieria, Ancient Dion, the sacred city of the Macedonians in an area that is submerged by water. By archaeological findings show that Dion covers an uninterrupted period of 1,000 years, from the 5th century. B.C. until the 5th century. A.D. Dominates the archaeological site and the theater, where even today played performances. 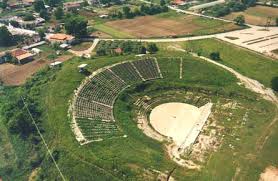 More photos of the area here .